Possibly the most challenging part of scratch-building a four-wheel chassis is making the front axle, with its complex steering mechanism. That’s because there are many moving parts which need to be carefully aligned and which need reasonably close bearing tolerances to prevent backlash.

So to make our scratch-build easier, we’re trying something a bit oddball in the steering department. The reason we’ve built it this way is that the parts automatically self-align themselves into the correct geometry without needing any precision drilling, accurate cutting, or precise bending. And the resulting mechanism has minimal ‘slop’.

On the other hand, this construction is completely untested and unproven. It’s also ‘engineered’ (can you hear the cat-laughter?) for a 50kg rider. The king-pins might not support a heavy adult driver – especially if powerful front brakes are added into the mix.

We’re publishing the ‘design’ (more cat-sniggers) here in the hope that it gives you some ideas that you can incorporate into your own build. Don’t slavishly copy it… we’re sure you’ll come up with something far better.

Start – at your own risk – with these bits and pieces which are guaranteed 🙂 to be found in the typical shed:

Plain nuts, M12, preferably self-colour MS. (BZP are OK but need extra preparation.)
Part-threaded bolts, self-colour MS (or BZP) M12 x 90mm. Or choose bolt-lengths depending on the desired axle and king-pin lengths (see below).
Drills, 12mm and 8mm.
Hollow 25mm square steel, 2.5mm wall thickness. Only this size will work properly.
Steel flat, 25mm x 2.5mm.
Welder – a 110A MIG is just about enough but more amps would be better.
A chop-saw, a vice and a pillar drill are handy. But not essential. 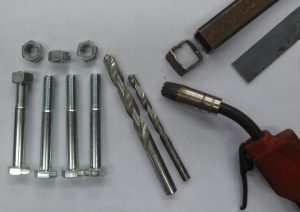 Begin by cutting a length of the steel tube, about 50mm long. Try to get the ends square. A chop-saw helps. This will be the foundation for one of the two uprights. 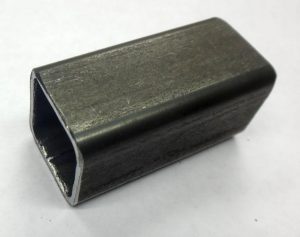 Drill 8mm holes right through, near each end. No need for precision, but try to put the holes as close to the ends as possible while leaving a sliver of metal between the holes and the ends of the tube. 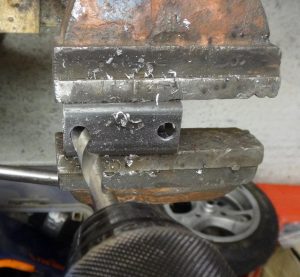 Drill out one of the M12 nuts to be 12mm clear. Again, precision is not paramount so a hand-held drill is fine. 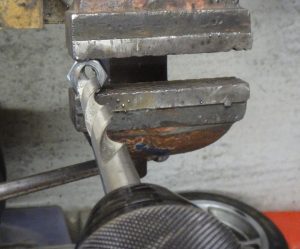 Use a vice or hammer to press the drilled-out nut into one end of the piece of tube. Make sure that two flats on the nut (not two points) are lined-up with the 8mm holes. (If the nuts are BZP then lightly grind off the zinc from those two flats before inserting.) 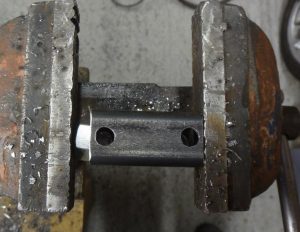 At the other end of the tube, press in a still-threaded nut by the same technique. The result then looks like this. 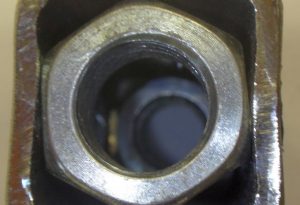 Pass a bolt through the drilled-out nut and into the threaded nut. If the bolt doesn’t turn freely, use it as a lever to realign the nuts until it can turn easily. (If the nuts were pressed in using a vice, they’ll be just about perfectly aligned already. But if driven in with a hammer… not so perfect.) 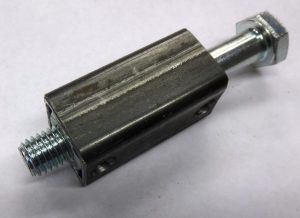 Remove the bolt, and plug-weld through the 8mm holes to fasten the nuts in place. Take care not to breathe any zinc fumes. (Look up ‘metal fume fever’.) 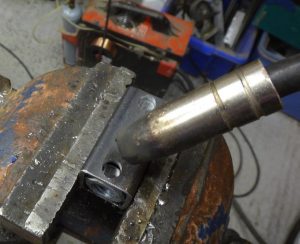 The part-finished upright looks like this. The threaded nut is going to be the top of the upright. Remember that when fitting the steering arm and axle later. 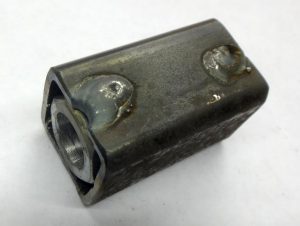 Cut a piece of square or rectangular steel tube to make the front cross-member. Its length should be equal to the desired separation of the king-pins, plus 24mm. This example uses 25mm x 25mm x 2mm tube – slightly lighter than the uprights. Drill a 12mm hole vertically* through the tube at one end, 12mm in from the end. A pillar drill really helps but if one is not available drill (imprecisely) by hand, then drill-out one of the holes to 13mm to give some wiggle-room. Repeat at the other end of the tube. 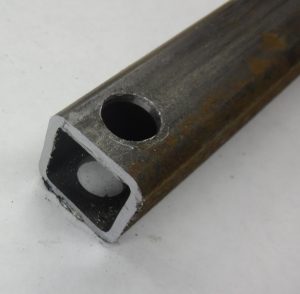 Pass a bolt through one end of the tube to create a king-pin. If necessary, adjust its alignment to get it vertical* then tack it in place by welding inside the tube. Repeat at the other end. If the bolts are BZP, grind off the zinc before welding. 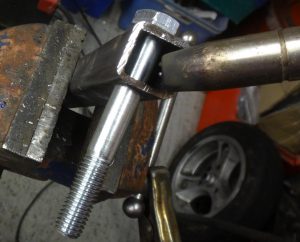 Fit the cross-member to the front of the chassis, welding it with the bolts upwards** but on a tilt to achieve whatever angle of caster is preferred. 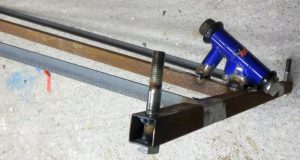 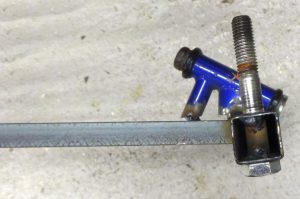 Tack a length of 25mm flat onto one of the faces of the 50mm upright to make the steering arm. Angle it for Ackerman geomentry, if preferred. Tack a bolt onto a neighbouring face to make the axle. Before welding the parts fully in place, make sure that they wouldn’t foul the chassis during fitting/removal of the upright (see below). And remove the zinc around the bolt-head. 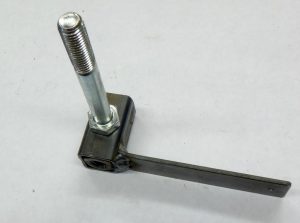 Drop the upright onto one of the king-pins and then spin it down a few turns to the desired height. Check the steering-arm and axle-bolt don’t foul the chassis during fitting. 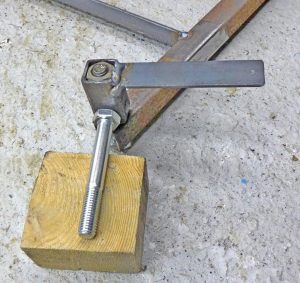 Remove the upright, finish welding the parts. Refit with grease inside the nuts. Repeat for the other mirror-image upright.

We used 10″ ‘sack truck’ wheels with a 20mm plain-bore in their plastic hubs. We countersunk each end of the bore to 24mm (6mm deep) and pressed-in a 6901-2RS bearing to give compatibility with a 12mm axle. (Beware that 6901ZZ is NOT compatible.) Then we fitted them onto the stub axles using nyloc nuts. 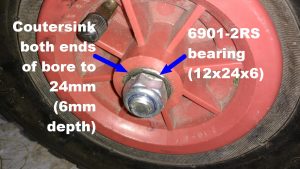 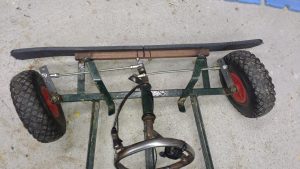 Our Hacky has seen a few races now, and there’s not much we would choose to change from this design. Possibly we’d try replacing the lower (drilled-out) M12 nut in the upright with a 6901ZZ (21mm outside dia) deep-groove bearing.

*The king-pin can be angled toward the tyre contact-point, to reduce tyre-scrub if preferred. Clearly the axle-bolt will be welded at an angle to match too.

**The king-pin could be arranged pointing downwards rather than upwards. But then both the king-pin and the threaded nut in the upright will need to be more firmly welded in place.