Antweights are tiny battlebots which must be small enough to fit into a cube which is 101.6mm (4″) on each side. And they must weigh less than 150g – or up to 225g if the robot has legs instead of wheels. Size apart, the concept of antweight robot-wars is pretty much the same as for the heavyweight robot-wars on TV: two robots are put into an arena where they must do battle until only one remains.

Antweight robot-wars is a world-wide sport. It runs at both club level and national/international level. Antweight is open to all. It’s very family-friendly and costs very little to get into. Participants range in age from 7 to at least 77.

MechanicalCat, in collaboration with some wizards at FabLab Pembrokeshire, has designed a play-all-day antweight set which includes 3D-printable robots, a CNC-able arena, and a 6-channel proportional RC system based on Arduino. The whole set – including the arena and half a dozen robots complete with their electronic circuitry and transmitters – can be built for a few hundred GBP. And it’s all free to download.

FabLab Pembrokeshire has built and exhibited one of these sets. At every show it goes to, the arena has always been surrounded by a crowd of people all day long, and the feedback from the players – kids and adults – has been overwhelmingly positive. It’s a great way to advertise a maker-space.

Bear in mind that these simple play-all-day robots are designed to battle each other pretty much all day long without destroying themselves. But please do understand that they are not suitable for real antweight battles in the AWS. If you were to send them into battle against just about any ‘proper’ antweight battlebot, then they’d be turned into minced plastic in seconds. (Do send us the video 🙂 ) 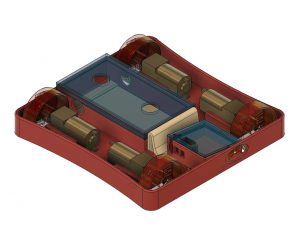 How the Radios Work

The unique radio control system is the key element that makes it possible to build an affordable antweight set.

The radio is based on Arduino and uses the ubiquitous nRF24L01+ modules. In this set-up they’ve a reliable range of about 5 metres and the receiver automatically goes safe when out of range.

Everything is programmed via the Arduino IDE – so it’s easy for beginner programmers to get into. And it’s easy to add sensors and actuators to the robot, too.

The transmitter circuit builds onto a single board complete with two Xbox-360 control knobs to give full proportional control on four axes plus two ‘click’ buttons for weapon control. It runs from a PP3 for many hours. There’s a 3D-printable TX case.

Dozens of transmitters can operate in the same room without interference. And up to 63 receivers can be uniquely bound to each transmitter.

A DSM-compatible receiver is in the pipeline, so you’ll optionally be able to use a Spektrum/Orange transmitter, too.

The entire set – including the electronics – is available for download now.